Eddy graduated from Archbishop Hoban High School on May 29th, 2016. He will continue on his education at the University of Akron this fall. He is planning on majoring in Graphic Design. The rest of the pictures from the graduation can be found on the pictures page. The team qualified for the playoffs and advanced all the way to the Division III Championship game. While most of the games during the regular season seemed to already be over far before the 4th quarter the playoff games were intense. So many close games keeping fans on the edge of their seats. The day of the championship game there was a team breakfast, then a trip to the NFL Football Hall of Fame in Canton, and then they went to Columbus to eat and get to the field. There was no school on Friday due to all the excitement surrounding Archbishop Hoban’s first championship game. This is what all the practices, staying up late, having to show up to a game on Friday night and Saturday morning, and giving up part of summer break was for. All the pictures can be viewed on the pictures page. 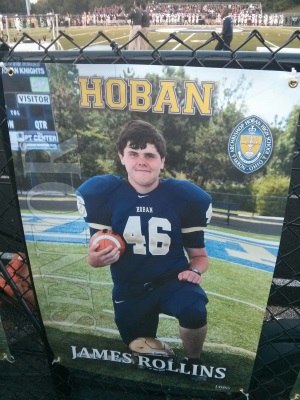 Eddy has started his Varsity year of football. Patty’s High School graduation was held at the Akron Civic Theater. Four years of rigorous education at Archbishop Hoban High School and the journey has come to an end. In attendance was her mother, sister, brother, her Aunt Becky and Uncle Andrew, their five children, her Grandmother, and a family friend. Patty has already been accepted to Notre Dame College and will be attending classes there starting in the fall. It was a monumental event in Patty’s life that we are all glad to have shared. The pictures can be found on the pictures page. The 2015 Spring Festival at Archbishop Hoban High School is the last one that Patty will be participating in. I have watched her play violin for years now and this was the last time that she will be playing in front of an audience as a part of Archbishop Hoban. She is graduating this year and I really hope she continues to play the violin as it is a great hobby and a great outlet for her creativity. Eddy had a game that he helped create on display. I got a chance to watch students play the game. There is talk that he might have that class again next year. I might be seeing another video game from Eddy next year. The pictures can all be found on the pictures page. This is the last year that Patty will be participating in the Winter Arts Festival at Archbishop Hoban High School, since she is graduating this year. It has been four years of her learning to and playing the violin. There will be one more performance that she will attend in the Spring. Eddy also had a piece of art that he had made in the gallery in the hallway. The pictures can be found on the pictures page. The 2014 season is over for the JV and Varsity Hoban Knights football teams. The games were all a lot of fun and they won more games than they lost, so overall it was a good season. Hotdogs were eaten, umbrellas were brought, and most of the games were watched. Eddy got a chance to play both sides of the ball this year as he played wide out and defensive line. All the pictures can be found on the pictures page.

Patty was a starter for the girls JV lacrosse team for the defense. She started playing defense last year, after moving away from goalie. Honestly she did not want to carry all the equipment that playing goalie entails, so this was a good move for her. The team managed to go 8-3 and the season was actually supposed to be a few games longer. The problem is that not every team (truth be told very few teams) have an artificial grass field, so the fields were swamped and no lacrosse could be played on them. All the pictures are on the pictures page.

Another Archbishop Hoban Winter Festival. Patty is playing the violin for the orchestra. The entire performance of both the orchestra and the choir only took about 45 minutes and attendance seemed to be rather on the sparse side. It was still good to be there.

James played JV football for Archbishop Hoban this year. That meant going to practice all week and attending Varsity and JV football games. Schedules did not permit being at every game, so the pictures were rather scarce, especially compared to last year, but all the pictures can be found on the pictures page.