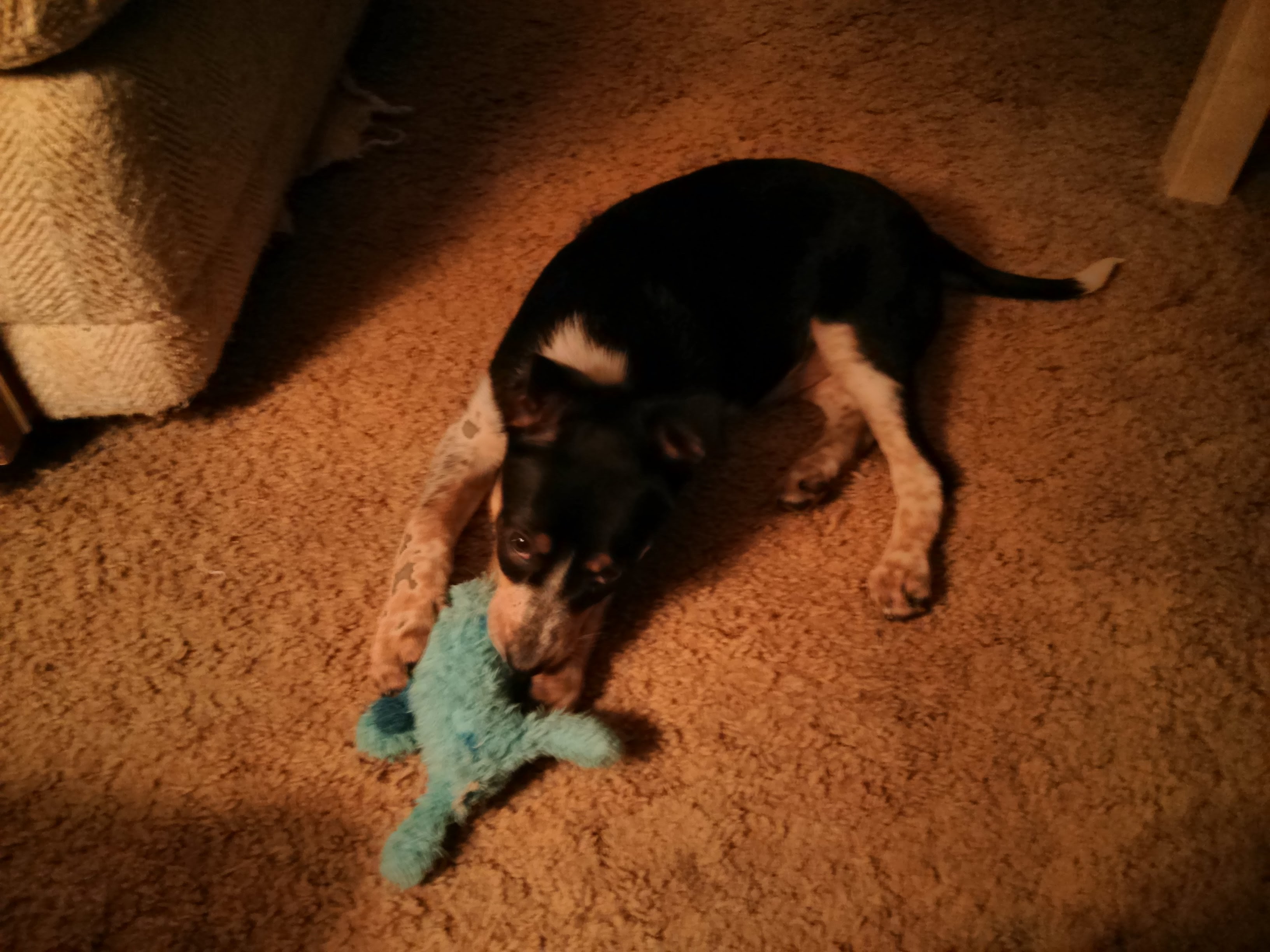 This rescue dog originally came to us as “Jake”, this 3 month old Australian Cattle Dog is now “Rigby”. The joys of house training, crate training, and teaching Rigby to play fetch have begun. Originally the plan for this birthday was a cookout, which has become a bit of a tradition, but the weather was not cooperating this week with temperatures in the 40’s and quite a bit of rain. It certainly looked as though the cookout could happen and the preparations were made to have one, but in the end the plans had to be changed. It was decided that the meal should be a favorite of Michelle’s choosing and what she wanted was potato gnocchi with vodka sauce. This dish is usually served with a vegetable, so yellow squash, zucchini, onions, and mushrooms were sauteed. This was served with a parmesan crusted chicken. It was a very elaborate meal. Dinner was served and it came out extremely well and there was plenty for everyone to eat. Next was the singing of “Happy Birthday” and ice cream cake. Finally, the presents were given to Michelle. The original gifts were things that she needed, but were sort of gag gifts in order to throw her off from the main gift, which was a new laptop. The complete set of pictures can be found on the pictures page.

One thing that really amazes me about Deanna is her ability to find coupons for all sorts of things. I know that it is typically stereotypical to assume women can find coupons for all manners of shopping, but she really can. She is also far more spontaneous than I am, so she ends up finding coupons for things that I was not even aware that I wanted to do. I do not know how she does this, but she found a coupon that allowed two people to play Paintball at a place in North Canton for $10 a person, which is a phenomenal discount considering with the cost of renting the equipment, the field, and purchasing the paint balls it would have been over $30 a person normally.

Deanna said that she used to go paintballing, either in a league or just with her brothers and some friends, but she had no intention of going this time (other than to take pictures). She got the coupons for Eddy and I to go. Eddy and I have never gone paintballing and between the aforementioned cost and the idea of getting pelted with small balls filled with paint it never seemed like something that I would be particularly interested in, but we decided it would be a good idea anyway.

After learning all the rules, the correct way to set the safety on the paintball “marker” (they do not want you to call it a gun), and getting our masks to fit right we were finally able to go out onto a dirt field and play. Eddy did a good job of following the rules and the directions for how to play. It was a warm day and I asked him to wear the long sleeved shirt and I am ultimately glad I did. There were two fields right next to each other and the one had inflatable objects and the other had metal and wooden objects placed about. Neither was really big. Eddy and I got to go one on one, because there was no one else there. This is actually how I would have preferred it anyway, since it was our first time.

We played until all our paint balls ran out. They do sting a bit when you get hit, but even though Eddy got tagged a few times he still wanted to play, so we had some fun. I got tagged quite a few times, but lucky for me two of the shots were into the helmet and mask, which you don’t honestly even feel. If I were asked if we would do it again I can not honestly say. It was sort of fun, but without a coupon I am not exactly sure that is something I would be willing to spend that kind of money on and I did not feel particular enthusiastic about the event enough to warrant the purchase of any of the equipment to reduce said cost of participation. All in all I would have to say that it was a good experience and maybe it is something Eddy can pursue.